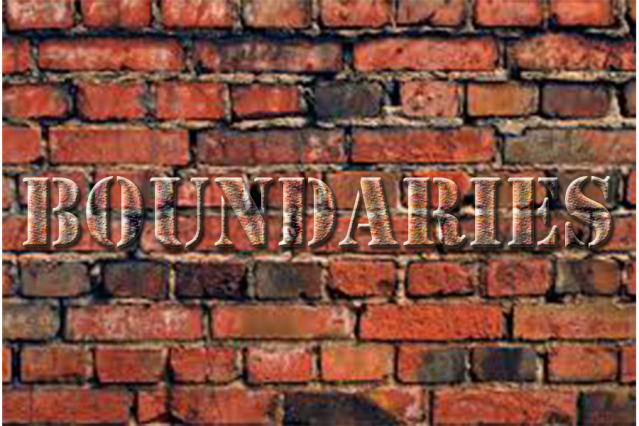 I now set precedence on what I will and will not accept and allow in my world, as a line drawn to not be crossed, but beforehand, what I liked and didn’t like (Out of self-interest) was the driving force to the boundaries I set and so felt violated if they were crossed, but interesting how I would cross them myself, when coming across a perceived good time, but would only do this when no one was around, where no matter what it was, would invalidate the boundaries I set in the first place, and so in hindsight, how could I possible become angry when someone else would cross the line with me, and I’ve done it to myself, i.e. accepting the point of victimization from another at the onset of a potential relationship and that’s just not it, more so the shit I put myself through to be in the “Good Graces” of others, which only caused “Good Grief” for me, and even more to see, how these boundaries also limited me, as in staying with an Idea of a belief system, such as religion for instance, that compelled me to look no further, there for a while, so when someone would tell me anything different; “You crossed the line buddy”, and would talk down or bad about them, because how could they possibly not agree with me, when so many have.

Not realizing that half the time I didn’t know what I was talking about, but only reciting what I thought I knew about, that didn’t really resonate with me, but force upon me, that I created a boundary around as a defense mechanism, that I didn’t really know how to defend, which brings up an interesting point of setting up boundaries that we’re not willing to defend, let alone know how to defend, and would easily turn coat at the minutest point of resistance, recanting our words, saying; “That’s not what I mean though, what I really mean was”… I can either take it or leave it’, and so have bound ourselves in fear of what another’s perception of us is.

The fear point is also interesting, because we’ll set boundaries out of the fear that something we’ve heard and/or seen happen to other, could possible happen to us and so don’t want to put ourselves in the same position, in which case caution is cool, but when the fear ‘thereof’ exceeds the caution level, where we start look at everyone and everything as an imaginative possibility of harm being done to us, is where we sabotage ourselves and a potentially successful relationship with people we come across in our worlds, and so end up losing ourselves within the boundaries we set.

In another aspect boundaries meaning, I’ve bound me to a dreary idea and/or belief that I’m all I got and need to stay clear from those who’s not my same race/creed/color or nationality, is where racism comes into play, where we’re racing straight into the point of destruction, because with division comes corruption and where there is corruption there is greed, and where there is greed there’s an Imbalance in society, and within this Imbalance the boundaries then change for and to the haves and the have nots, no matter the DNA, but ‘hey’, that’s just the way we have limited ourselves for so long as a whole, that has created a life that’s not worth living for most, but have become accustom to maintaining just to get by, then die and realize I had the ability to change my life and didn’t do it, because I accepted the boundaries I’ve placed upon myself and so this world as a whole, that’s a part of me.

Within an effective boundary set, the corrective placement of ‘When and as I see myself’ is needed, being that without this corrective statement, one is bound to lift the draw bridge of the boundary set, giving ourselves leeway to go back on our stance and so let prance in, our acceptances of old, because our boundaries wasn’t written and set in stone as something to live by, but only set as a barrier to not face the lies we’ve told ourselves an still believe to be the truth of who we are, Therefore;

I forgive myself that I have accepted and allowed myself to have set boundaries that I wasn’t necessarily willing to live by, as a pass time belief that in doing so would rectify my life for the better, then would let them down to allow my self-interest to be fulfilled, then afterwards, put them back up towards the next person I see, as the perfect presentation of myself.

I forgive myself that I have accepted and allowed myself to have missed a victimizing point from another in my world as a potential relationship prospect, due to not setting this as a boundary as something to look out for in the first place, that would have changed the way I went into relationships, for the better.

I forgive myself that I have accepted and allowed myself to not realize the ability to change my life, is in fact within how resilient I am with maintaining the boundaries I set, as the things I will and will not accept and allow for myself in my world.

And on another note, I forgive myself that I have accepted and allowed myself to have gone overboard with setting too many boundaries, in fear of things going wrong in my world with people in my world, which limited me from getting to know, sharing and expanding my interaction with those I’ve came across in my world., that I in turn, downed, because of a made-up assumption about them in my mind, that I gathered from old interactions with others in my world, believing that it would be the same old thing, when all that was needed was for me to change my stance, and so on and so for, until the boundaries we set, stand for the change in us, and so would change our separation into an invitation, that what I’m learning to live, can be lived by all, because I’ve inverted the boundaries I’ve set outwards, inwards towards me, that would then be projected back outwards to all, as doing what’s best for all..